The Weekly - Currency - the cherry on the cake?

The Weekly - Currency - the cherry on the cake?

When assessing the health of any economy it is useful to look at the strength of the corresponding currency. Some even view the currency as the share price of that economy. As we know, the US has been performing strongly, and the US dollar has been spurred to highs when compared to many of its developed peers. This is usually because economic strength attracts foreign capital which then must buy the currency in order to invest. In addition, when economic growth rises, interest rates usually rise with it and that provides a better comparative return for cash.

Many investors don’t often think about currency when investing in overseas markets, but UK investors need to be more aware than most. When we voted to leave the EU, sterling dramatically weakened against most other currencies, literally overnight. This had the temporary effect of boosting the stock values of many companies in the FTSE 100, but only because multinational companies derive much of their earnings overseas. So, when converting their overseas earnings back to a weakened sterling they were able to do so at a much more favourable rate. Effectively, as the ‘share price’ of the UK economy has fallen, the FTSE 100 has actually risen on the ‘currency translation effect”- a fortunate quirk due to the significant overseas content of the FTSE 100.

However, at the other end of the spectrum to sterling is the US Dollar which has gone from strength to strength. Over five years it is up against the Japanese Yen, Swiss Franc, Euro, Canadian Dollar and, not surprisingly, sterling. 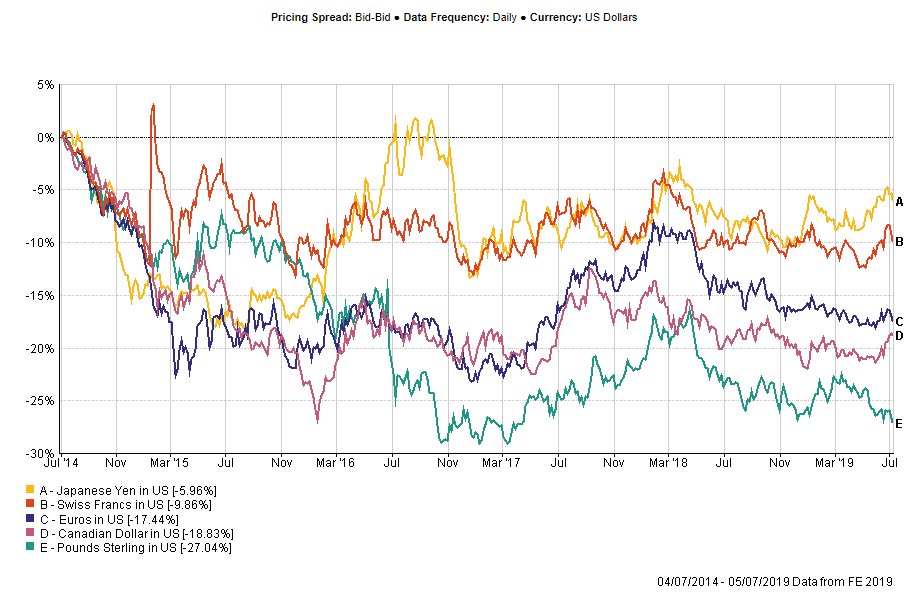 The US earning season starts in earnest on 15 July and an indicator of the currency effect was the announcement by Nike, the shoe and clothing manufacturer, that it had missed earnings estimates for the first time since 2012 (Bloomberg). Nike is a good barometer considering its worldwide footprint. Its share price remained robust on the announcement, because it still managed to increase revenue despite missing its earnings estimates. Full year revenue was up 7%, however, on a currency neutral basis it was up 11%. On a currency neutral basis then it would have likely hit its earnings estimates, removing the dampening effect of a strong US Dollar.

It's easy to see why Donald Trump may want to influence the Federal Reserve Bank (FED). If the FED increased rates as initially planned, then this would only make the US Dollar more expensive when compared to its peers. Many other multinationals based in the US would struggle with an even more resurgent US Dollar. Given that the President seems to measure his success by the level of the US stock market, this would be bad news as he fights for his second term in 2020.

Ahead of the US reporting season, we must be careful predicting weakness as many market commentators have been embarrassed by predicting the cooling of the US economy. This is even more so given the unpredictability of the President. His tax cuts have certainly stimulated the US economy and has benefited companies in the US. However, of more certainty is the comparison of the stock market performance between Donald Trump and Barack Obama. On a USD comparison basis, under Donald Trump the S&P 500 has climbed 31.7% since his inauguration on 20 January 2017. Under the tenure of Barack Obama over the same period of his first term the S&P 500 climbed 66.9%. Of course, this isn’t really comparing like for like; considering the 2008 financial crisis, markets were recovering from huge falls, and benefited from huge amounts of stimulus that were required to keep the global economy afloat.

Nevertheless, of late the US stock market has been impressive, helped by the tax cuts, boom in technology and low interest rates. But currency headwinds could well be the reversal of the cherry on the cake, and it may be time for UK investors to wake up and smell the coffee before any cooling in the US economy occurs.

A simple example illustrates this best. At the time of writing the GBP/USD exchange rate is around 1.26 so for every £1 you receive $1.26. A £10,000 investment into the tech giant that is Apple (currently trading at around $200 per share) would enable the investor to buy 63 shares valued at $12,600. If, over the course of the year, the share price in Apple dropped 10%, then the holding would only be worth $11,340. If Sterling strengthened against the Dollar over the same period so now £1 was worth $1.40 and the Apple shares were sold, and the proceeds converted back into Sterling, then we would be left with £8,100. Despite the shares only falling 10%, the investor would be sitting on a 19% loss in sterling terms.

This combination may seem unlikely but given US market is at an all-time high and sterling at multi-year lows, then this scenario is not as unlikely as everybody seems to think. A rise in sterling is inevitable at some point as we move forward from the Brexit impasse. Investors have had a boost from the currency translation effect as sterling has weakened – but what goes up must come down, or in this case, the opposite, which will have a negative effect on returns.

Global equities enjoyed a strong week with sentiment lifted by apparent progress in US-China trade negotiations at the prior weekend’s G20 summit in Osaka. US President Trump revealed that further tariffs on Chinese manufactured imports would be postponed whilst he also agreed to ease the sales ban on US made semiconductor chips to Chinese telecoms giant Huawei. The S&P500 and Nasdaq both hit record levels on Wednesday with the former closing the week up +1.7%.

At home, the FTSE100 rose by +1.7% with the midcap focused FTSE250 rising by +1.0%. European stocks also ended the week in positive territory, helped by elevated hopes of further ECB stimulus. The German DAX30 jumped by +1.4% whilst the French CAC40 climbed by +1.0% after IMF Director Christine Lagarde was nominated to be the next President of the Central Bank. She is expected to continue the loose monetary policy set out by Mario Draghi.

Friday’s US jobs report which showed better-than-expected job creation during June result in higher Treasury yields across the curve. The 10-year jumped by 10 basis points (bps) on Friday to 2.04% as investors digested the possibility that a Fed rate cut could be postponed. Domestically, the 10-year Git yield declined by a further 9bps to 0.74% whilst on the Continent, both German and French equivalent sovereigns hit fresh lows, the latter of which falling to -0.10% for the first time.

In the commodity markets, oil declined for the first time in 5 weeks despite OPEC and its allies agreeing to extend their respective production cuts into next year. Concerns regarding the outlook for the global economy and the impact that weaker growth could have on oil demand left Brent crude -3.5% lower for the week at $64.23 a barrel. Gold meanwhile ended the week in negative territory, after declining by -1.2% to $1,395 an ounce. (Source: FE Analytics)

In a relatively quiet start to the week, there is little in the way of economic data until Wednesday when UK Gross Domestic Product (GDP) is due for the three months to the end of May with 0.3% growth forecast. Downward trending data of late has led to speculation the Bank of England could loosen policy. The Bank’s own Financial Stability Report is scheduled to follow on Thursday.

Overseas, The European Central Bank and the US Federal Reserve are expected to publish minutes of their respective monetary policy meetings. The latest Federal Open Market Committee meeting in particular will face close scrutiny given the growing expectation that the Fed will cut rates this summer. This expectation may increase further depending on the wording and tone of the report. In terms of data, the Consumer Price Index (CPI) will gauge US inflation on Thursday afternoon.

Source: FTSE International Limited ("FTSE") © FTSE 2019. "FTSE ®" is a trade mark of the London Stock Exchange Group companies and is used by FTSE International Limited under licence. All rights in the FTSE indices and/or FTSE ratings vest in FTSE and/or its licensors. Neither FTSE nor its licensors accept any liability for any errors or omissions in the FTSE indices and/or FTSE ratings or underlying data. No further distribution of FTSE Data is permitted without FTSE's express written consent.

The information contained does not constitute investment advice. It is not intended to state, indicate or imply that current or past results are indicative of future results or expectations. Full advice should be taken to evaluate the risks, consequences and suitability of any prospective investment. Opinions provided are subject to change in the future as they may be influenced by changes in regulation or market conditions. Where the opinions of third parties are offered, these may not necessarily reflect those of Rowan Dartington.